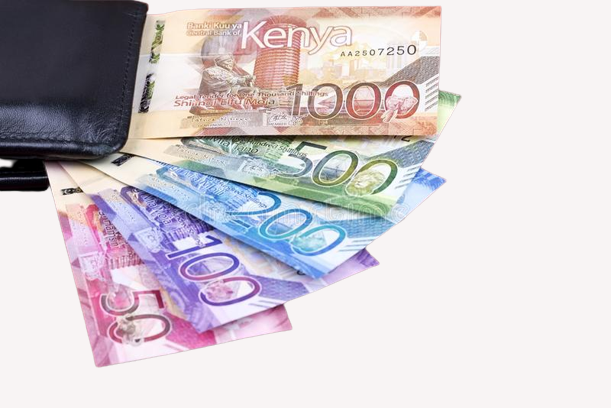 a) Introduction
This Wage Bill Bulletin covers the first quarter of the Financial Year (FY) 2022/2023, that is, July–September 2022. The quarter was characterised by high intensity general election campaigns, which slowed down in mid-September 2022, after the swearing in of the new President of Kenya.

b) SRC First Quarter Advice
During the period under review, SRC received 23 requests that had a cost implication amounting to Ksh 1,949,019,947. The requests received were as follows: a) Salary reviews (2); b) Collective Bargaining Negotiations (5); c) Allowances and Benefits (14); and d) Performance bonus (2).

Table 1 below shows the approved requests as a share of the requests placed by public institutions during the FY 2021/22 and FY 2022/23. 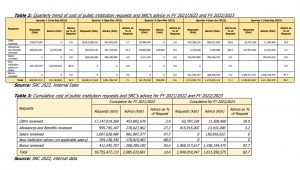 c) Personnel emoluments for county governments
The Public Finance Management (PFM) Act, 2012, and the attendant PFM (Regulations), 2015, set the threshold of not more than 35 per cent of wage bill to total revenue ratio.

During the first quarter, the personal emoluments (PE), as a share of the total revenue ratio, is projected to be 79.5 per cent, which is above the recommended 35 per cent threshold.

As such, county governments are advised to institute appropriate measures to ensure adherence to the PFM (County Government) Regulations, 2015, threshold on PE to revenue ratio of not more than 35 per cent, of the total revenue spent on PE. 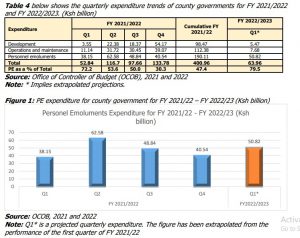 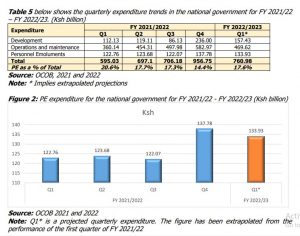 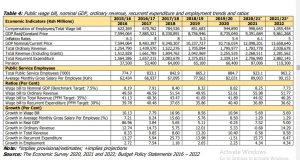 It is calculated by taking price changes for each item in the predetermined basket of goods and averaging them. Changes in the CPI is used to assess price changes associated with the cost of living.

e.2) Inflation rate
Inflation is a persistent increase in the general price of goods in an economy over a given period of time. During the first quarter, inflation was above the target range of 5 per cent, plus or minus 2.5 per cent set by the Central Bank of Kenya (CBK).

Inflation has been increasing from 8.32 per cent in July 2022, to 8.53 per cent in August 2022, to 9.2 per cent in September 2022. This is occasioned by the disruption of the global supply chains caused by the Ukraine-Russia war and the anxiety among economic actors in the country over the general elections. 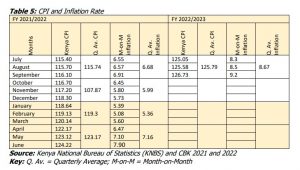 This revenue projection is approximately Ksh 449 million higher than the total revenue collection of Ksh 2,031 billion in FY 2021/2022.

g) Public service employees
According to KNBS (2022), Kenya’s total workforce stands at 12 million, with 10 million being in the informal sector. Only two million of the workforce constitute the formal sector, which comprises government civil service, staff of parastatals and the private sector employees.

The share of private sector employment was 68.3 per cent in 2021, which was slightly higher than the previous year, which stood at 67.8 per cent.

h) Conclusion
During the first quarter, the following were observed:
1) SRC continued to receive and review various requests on salaries and benefits from public service institutions.
2) Revenue is projected to decline on account of economic slowdown due to the general election-related activities, which historically slows down the economic performance.
3) The cost of living is likely to rise as a result of increase in fuel prices and the removal of fuel subsidy, hence, a likely demand for pay increase.
4) The wage bill for the national and county governments is projected to increase as a result of the creation of new offices, such as the Office of the Prime Cabinet Secretary, among others, in addition to existing ones.

Strategic Plan: A time to review and refocus

Celebrating an illustrious chapter of a Commissioner

Proposed Remuneration and Benefits for State Officers for Public Participation

SRC Lights Up Lives of Children at Metameta Children’s Home